The U.S. Labor Department’s inspector general said this week that roughly $100 million in fraudulent unemployment insurance claims were paid in 2020 to criminals who are already in jail. That’s a tiny share of the estimated tens of billions of dollars in jobless benefits states have given to identity thieves in the past year. To help reverse that trend, many states are now turning to a little-known private company called ID.me. This post examines some of what that company is seeing in its efforts to stymie unemployment fraud.

These prisoners tried to apply for jobless benefits. Personal information from the inmate IDs has been redacted. Image: ID.me

A new report (PDF) from the Labor Department’s Office of Inspector General (OIG) found that from March through October of 2020, some $3.5 billion in fraudulent jobless benefits — nearly two-thirds of the phony claims it reviewed — was paid out to individuals with Social Security numbers filed in multiple states. Almost $100 million went to more than 13,000 ineligible people who are currently in prison.

The OIG acknowledges that the total losses from all states is likely to be tens of billions of dollars. Indeed, just one state — California — disclosed last month that hackers, identity thieves and overseas criminal rings stole more than $11 billion in jobless benefits from the state last year. That’s roughly 10 percent of all claims.

Bloomberg Law reports that in response to a flood of jobless claims that exploit the lack of information sharing among states, the Labor Dept. urged the states to use a federally funded hub designed to share applicant data and detect fraudulent claims filed in more than one state. But as the OIG report notes, participation in the hub is voluntary, and so far only 32 of 54 state or territory workforce agencies in the U.S. are using it.

Much of this fraud exploits weak authentication methods used by states that have long sought to verify applicants using static, widely available information such as Social Security numbers and birthdays. Many states also lacked the ability to tell when multiple payments were going to the same bank accounts.

To make matters worse, as the Coronavirus pandemic took hold a number of states dramatically pared back the amount of information required to successfully request a jobless benefits claim.

In response, 15 states have now allied with McLean, Va.-based ID.me to shore up their authentication efforts, with six more states under contract to use the service in the coming months. That’s a minor coup for a company launched in 2010 with the goal of helping e-commerce sites validate the identities of customers for the purposes of granting discounts for veterans, teachers, students, nurses and first responders.

ID.me says it now has more than 36 million people signed up for accounts, with roughly 77,000 new users signing up each day. Naturally, a big part of that growth has come from unemployed people seeking jobless benefits.

To screen out fraudsters, ID.me requires applicants to supply a great deal more information than previously requested by the states, such as images of their driver’s license or other government-issued ID, copies of utility or insurance bills, and details about their mobile phone service.

When an applicant doesn’t have one or more of the above — or if something about their application triggers potential fraud flags — ID.me may require a recorded, live video chat with the person applying for benefits.

This has led to some fairly amusing attempts to circumvent their verification processes, said ID.me founder and CEO Blake Hall. For example, it’s not uncommon for applicants appearing in the company’s video chat to don disguises. The Halloween mask worn by the applicant pictured below is just one example. 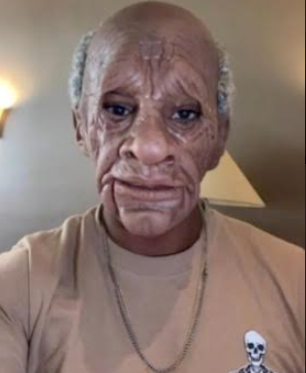 Hall said the company’s service is blocking a significant amount of “first party” fraud — someone using their own identity to file in multiple states where they aren’t eligible — as well as “third-party” fraud, where people are tricked into giving away identity data that thieves then use to apply for benefits.

“There’s literally every form of attack, from nation states and organized crime to prisoners,” Hall said. “It’s like the D-Day of fraud, this is Omaha Beach we’re on right now. The amount of fraud we are fighting is truly staggering.”

According to ID.me, a major driver of phony jobless claims comes from social engineering, where people have given away personal data in response to romance or sweepstakes scams, or after applying for what they thought was a legitimate work-from-home job.

“A lot of this is targeting the elderly,” Hall said. “We’ve seen [videos] of people in nursing homes, where folks off camera are speaking for them and holding up documents.”

“We had one video where the person applying said, ‘I’m here for the prize money,’” Hall continued. “Another elderly victim started weeping when they realized they weren’t getting a job and were the victim of a job scam. In general though, the job scam stuff hits younger people harder and the romance and prize money stuff hits elderly people harder.”

Many other phony claims are filed by people who’ve been approached by fraudsters promising them a cut of any unemployment claims granted in their names.

“That person is told to just claim that they had their identity stolen when and if law enforcement ever shows up,” Hall said.

REACTIONS FROM THE UNDERGROUND

Fraudsters involved in filing jobless benefit claims have definitely taken notice of ID.me’s efforts. Shortly after the company began working with California in December 2020, ID.me came under a series of denial-of-service (DDoS) attacks aimed at knocking the service offline.

“We have blocked at least five sustained, large-scale DDoS attacks originating from Nigeria trying to take our service down because we are blocking their fraud,” Hall said.

In May 2020, KrebsOnSecurity examined postings to several Telegram chat channels dedicated to selling services that help people fraudulently apply for jobless benefits. These days, some of the most frequent posts on those channels advertise the sale of various “methods” or tips about how to bypass ID.me protections.

Asked about the efficacy of those methods, Hall said while his service can’t stop all phony jobless claims, it can ensure that a single scammer can only file one fraudulent application.

That’s something of an understatement in an era when being able to limit each scammer to a single fraudulent claim can be considered progress. But Hall says one of the reasons we’re in this mess is that the states have for too long relied on data broker firms that sell authentication services based on static data that is far too easy for fraudsters to steal, buy or trick people into giving away.

“There’s been a real shift in the market from data-centric identity verification to verifying through something you have and something you are, like a phone or face or ID,” he said. “And those aren’t in the provenance of the incumbents, the data-centric brokers. When there have been so many data breaches that the toothpaste is basically out of the tube, you need a full orchestration platform.”

Collecting and storing so much personal data on tens of millions of Americans can make one an attractive target for hackers and ID thieves. Hall says ID.me is certified against the NIST 800-63-3 digital identity guidelines, employs multiple layers of security, and fully segregates static consumer data tied to a validated identity from a token used to represent that identity.

“We take a defense-in-depth approach, with partitioned networks, and use very sophisticated encryption scheme so that when and if there is a breach, this stuff is firewalled,” he said. “You’d have to compromise the tokens at scale and not just the database. We encrypt all that stuff down to the file level with keys that rotate and expire every 24 hours. And once we’ve verified you we don’t need that data about you on an ongoing basis.”

With such a high percentage of jobless claims now being filed by identity thieves, many states have instituted new fraud filters that ended up rejecting or delaying millions of legitimate claims.

ID.me says roughly eight users will pass through its automated self-serve flow for every one user who needs to use the video chat method to verify their identity.

“The majority of legitimate claimants pass our automated, self-serve identity verification process in less than five minutes,” Hall said. “For individuals who fail this process, we are the only company in the United States that offers a secure, video chat based method of identity verification to ensure that all users are able to prove their identity online.”

Hall says his company also exceeds the industry standard in terms of validating the identities of people with little or no credit history.

“If you just rely on credit bureaus or data brokers for this, it means anyone who doesn’t have a credit history doesn’t get through,” he said. “And that tends to have a disproportionate affect on those more likely to be less affluent, such as minority communities.”