New research into the malware that set the stage for the megabreach at IT vendor SolarWinds shows the perpetrators spent months inside the company’s software development labs honing their attack before inserting malicious code into updates that SolarWinds then shipped to thousands of customers. More worrisome, the research suggests the insidious methods used by the intruders to subvert the company’s software development pipeline could be repurposed against many other major software providers.

In a blog post published Jan. 11, SolarWinds said the attackers first compromised its development environment on Sept. 4, 2019. Soon after, the attackers began testing code designed to surreptitiously inject backdoors into Orion, a suite of tools used by many Fortune 500 firms and a broad swath of the federal government to manage their internal networks. 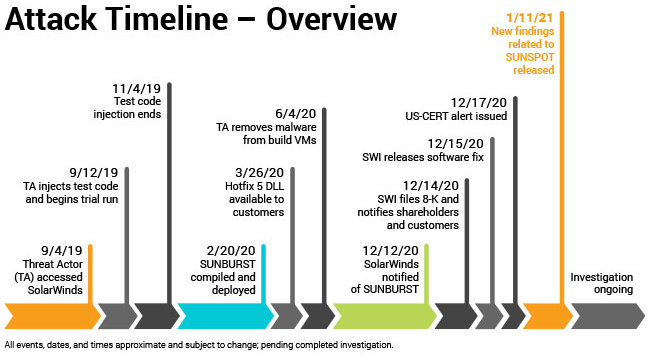 According to SolarWinds and a technical analysis from CrowdStrike, the intruders were trying to work out whether their “Sunspot” malware — designed specifically for use in undermining SolarWinds’ software development process — could successfully insert their malicious “Sunburst” backdoor into Orion products without tripping any alarms or alerting Orion developers.

In October 2019, SolarWinds pushed an update to their Orion customers that contained the modified test code. By February 2020, the intruders had used Sunspot to inject the Sunburst backdoor into the Orion source code, which was then digitally signed by the company and propagated to customers via SolarWinds’ software update process.

Crowdstrike said Sunspot was written to be able to detect when it was installed on a SolarWinds developer system, and to lie in wait until specific Orion source code files were accessed by developers. This allowed the intruders to “replace source code files during the build process, before compilation,” Crowdstrike wrote.

The attackers also included safeguards to prevent the backdoor code lines from appearing in Orion software build logs, and checks to ensure that such tampering wouldn’t cause build errors.

“The design of SUNSPOT suggests [the malware] developers invested a lot of effort to ensure the code was properly inserted and remained undetected, and prioritized operational security to avoid revealing their presence in the build environment to SolarWinds developers,” CrowdStrike wrote.

So far, the Teardrop malware has been found on several government networks, including the Commerce, Energy and Treasury departments, the Department of Justice and the Administrative Office of the U.S. Courts.

SolarWinds emphasized that while the Sunspot code was specifically designed to compromise the integrity of its software development process, that same process is likely common across the software industry.

“Our concern is that right now similar processes may exist in software development environments at other companies throughout the world,” said SolarWinds CEO Sudhakar Ramakrishna. “The severity and complexity of this attack has taught us that more effectively combatting similar attacks in the future will require an industry-wide approach as well as public-private partnerships that leverage the skills, insight, knowledge, and resources of all constituents.”