A Pennsylvania man who operated one of the Internet’s longest-running online attack-for-hire or “booter” services was sentenced to five years probation today. While the young man’s punishment was heavily tempered by his current poor health, the defendant’s dietary choices may have contributed to both his capture and the lenient sentencing: Investigators say the onetime booter boss’s identity became clear after he ordered a bacon and chicken pizza delivered to his home using the same email address he originally used to register his criminal attack service.

The landing page for the Quantum Stresser attack-for-hire service.

Investigators say Bukoski’s booter service was among the longest running services targeted by the FBI, operating since at least 2012. The government says Quantum Stresser had more than 80,000 customer subscriptions, and that during 2018 the service was used to conduct approximately 50,000 actual or attempted attacks targeting people and networks worldwide.

The Quantum Stresser Web site — quantumstress[.]net — was among 15 booter services that were seized by U.S. and international authorities in December 2018 as part of a coordinated takedown targeting attack-for-hire services.

Federal prosecutors in Alaska said search warrants served on the email accounts Bukoski used in conjunction with Quantum Stresser revealed that he was banned from several companies he used to advertise and accept payments for the booter service.

The government’s sentencing memorandum says Bukoski’s replies demanding to know the reasons for the suspensions were instrumental in discovering his real name.  FBI agents were able to zero in on Bukoski’s real-life location after a review of his email account showed a receipt from May 2018 in which he’d gone online and ordered a handmade pan pizza to be delivered to his home address. 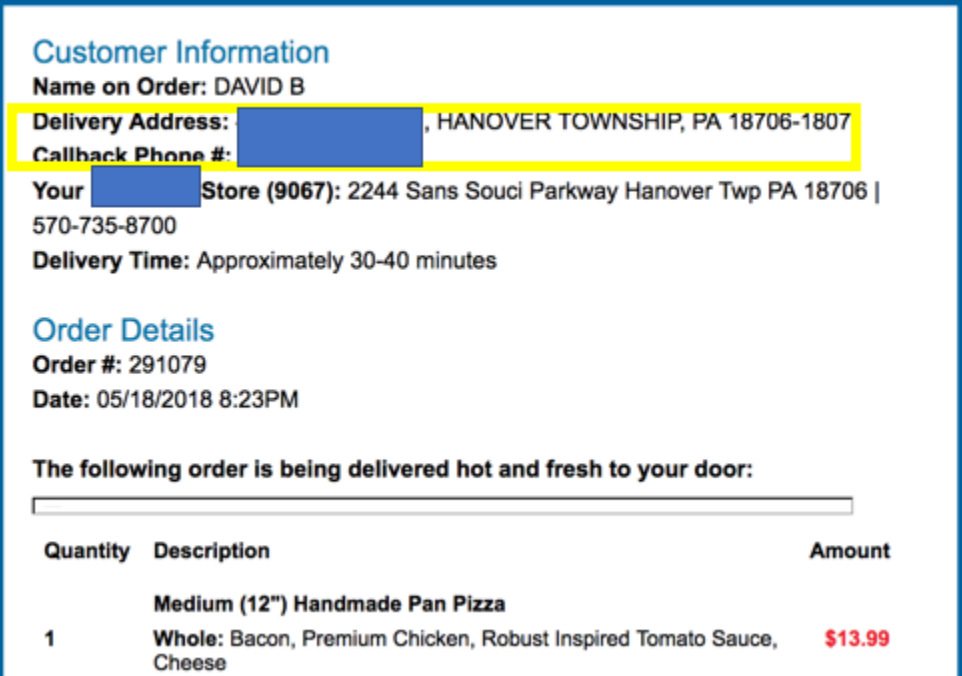 When an online pizza delivery order brings FBI agents to raid your home.

While getting busted on account of ordering a pizza online might sound like a bone-headed or rookie mistake for a cybercriminal, it is hardly unprecedented. In 2012 KrebsOnSecurity wrote about the plight of Yuriy “Jtk” Konovalenko, a then 30-year-old Ukrainian man who was rounded up as part of an international crackdown on an organized crime gang that used the ZeuS malware to steal tens of millions of dollars from companies and consumers. In that case, Konovalenko ultimately unmasked himself because he used his Internet connection to order the delivery of a “Veggie Roma” pizza to his apartment in the United Kingdom.

Interestingly, the feds say their examination of Bukoski’s Internet browsing records showed he knew full well that running a booter service was punishable under federal law (despite disclaimers published on Quantum Stresser stating that the site’s owners weren’t responsible for how clients used the service).

“The defendant’s web browsing history was significant to investigators for a number of reasons, including the fact that it shows that the defendant browsed an article written by a prominent security researcher referencing both the defendant’s enterprise along with a competing service, including a link provided by the researcher in the article to an advisory posted by the FBI warning that the operation of booter services was potentially punishable under federal law,” reads the sentencing memo from Assistant U.S. Attorney Adam Alexander.

That’s interesting because the article in question was actually a 2017 KrebsOnSecurity story about a mobile app tied to a competing booter service that happened to share some of the same content as Quantum Stresser.

That 2017 story referenced an FBI advisory that had just been issued warning the use of booter services is punishable under the Computer Fraud and Abuse Act, and may result in arrest and criminal prosecution.

Bukoski was sentenced to five years of probation and six months of “community confinement.” The government suggested a lenient sentence considering the defendant’s ongoing health complications, which include liver failure.