Following today’s breaking news about U.S. and international authorities taking down the competing Dark Web drug bazaars AlphaBay and Hansa Market, KrebsOnSecurity caught up with the Dutch investigators who took over Hansa on June 20, 2017. When U.S. authorities shuttered AlphaBay on July 5, police in The Netherlands saw a massive influx of AlphaBay refugees who were unwittingly fleeing directly into the arms of investigators. What follows are snippets from an exclusive interview with Petra Haandrikman, team leader of the Dutch police unit that infiltrated Hansa.

Vendors on both AlphaBay and Hansa sold a range of black market items — most especially controlled substances like heroin. According to the U.S. Justice Department, AlphaBay alone had some 40,000 vendors who marketed a quarter-million sales listings for illegal drugs to more than 200,000 customers. The DOJ said that as of earlier this year, AlphaBay had 238 vendors selling heroin. Another 122 vendors advertised Fentanyl, an extremely potent synthetic opioid that has been linked to countless overdoses and deaths.

In our interview, Haandrikman detailed the dual challenges of simultaneously dealing with the exodus of AlphaBay users to Hansa and keeping tabs on the giant increase in new illicit drug orders that were coming in daily as a result.

The profile and feedback of a top AlphaBay vendor. Image: ShadowDragon.io

KrebsOnSecurity (K): Talk a bit about how your team was able to seize control over Hansa.

Haandrikman (H): When we knew the FBI was working on AlphaBay, we thought ‘What’s better than if they come to us?’ The FBI wanted [the AlphaBay takedown] to look like an exit scam [where the proprietors of a dark web marketplace suddenly abscond with everyone’s money]. And we knew a lot of vendors on AlphaBay would probably come over to Hansa when AlphaBay was closed.

K: Where was Hansa physically based?

H: We knew the Hansa servers were in Lithuania, so we sent an MLAT (mutual legal assistance treaty) request to Lithuania and requested if we could proceed with our planned actions in their country. They were very willing to help us in our investigations.

K: So you made a copy of the Hansa servers?

H: We gained physical access to the machines in Lithuania, and were able to set up some clustering between the [Hansa] database servers in Lithuania and servers we were running in our country. With that, we were able to get a real time copy of the Hansa database, and then copy over the Web site code itself.

K: Did you have to take Hansa offline for a while during this process?

H: No, it didn’t really go offline. We were able to create our own copy of the site that was running on servers in the Netherlands. So there were two copies of the site running simultaneously. 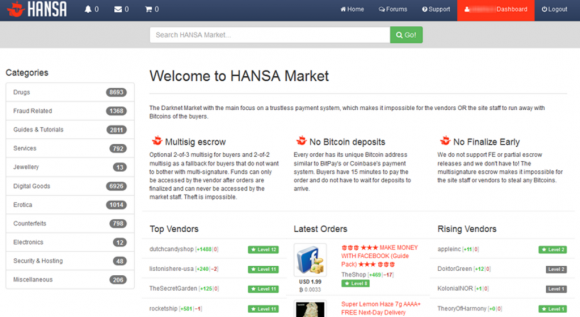 K: At a press conference on this effort at the U.S. Justice Department in Washington, D.C. today, Rob Wainwright, director of the European law enforcement organization Europol, detailed how the closure of AlphaBay caused a virtual stampede of former AlphaBay buyers and sellers taking their business to Hansa Market. Tell us more about what that influx was like, and how you handled it.

H: Yes, we called them “AlphaBay refugees.” It wasn’t the technical challenge that caused problems. Because this was a police operation, we wanted to keep up with the orders to see if there were any large amounts [of drugs] being ordered to one place, [so that] we could share information with our law enforcement partners internationally.

K: How exactly did you deal with that? Were you able to somehow slow down the orders coming in?

H: We just closed registration on Hansa for new users for a few days. So there was a temporary restriction for being able to register on the site, which slowed down the orders each day to make sure that we could cope with the orders that were coming in.

K: Did anything unexpected happen as a result?

H: Some people started selling their Hansa accounts on Reddit. I read somewhere that one Hansa user sold his account for $40. The funny part about that was that sale happened about five minutes before we re-opened registration. There was a lot of frustration from ex-AlphaBay users that weren’t allowed to register on the site. But we also got defended by the Hansa community on social media, who said it was a great decision by us to educate certain AlphaBay users on Hansa etiquette, which doesn’t allow the sale of things permitted on AlphaBay and other dark markets, such as child pornography and firearms. 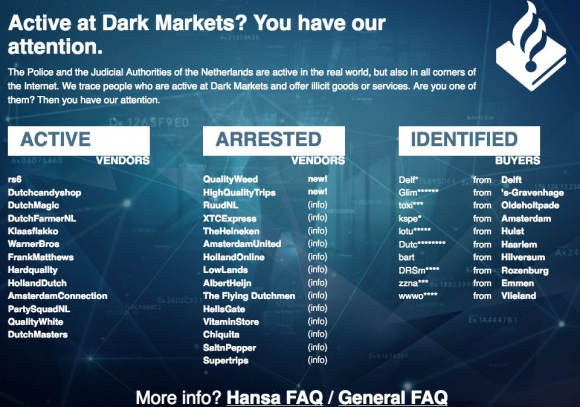 A message from Dutch authorities listing the top dark market vendors by nickname.

K: You mentioned earlier that the FBI wanted AlphaBay users to think that the reason for the closure of that marketplace was that its operators and administrators had conducted an ‘exit scam’ where they ran off with all of the Bitcoin and virtual currency that vendors and buyers had stored in their marketplace wallets temporarily. Why do you think they wanted this to look like an exit scam?

H: The idea was to hit the dark markets even harder when they think they’re just moving to another market and it turns to be law enforcement. Breaking the trust, so that [users] would not feel safe on a dark market.

K: It has been reported that just a few days ago the Hansa market administrators decided to ban the sale of Fentanyl. Were Dutch police involved in that at all?

H: It was a combination of things. One of the site’s employees or moderators started a discussion about this drug. We obviously also had our own opinion about it. It was a pretty good dialogue between us and the Hansa moderators to ban this from the site, and [that decision received] a lot of support from the community. But we didn’t instigate that discussion.

K: Have the Dutch police arrested anyone in connection with this investigation so far?

H: Yes, we identified several people in the Netherlands using the site, and there have already been several arrests made [tied to] Fentanyl.

K: Can you talk about whether your control over Hansa helped you identify users?

H: We did use some technical tricks to find out who people are, but we can’t go into that a lot because the investigation is still going on. But we did try to change the behavior [of some Hansa users] by asking for things that helped us to identify a lot of people and money.

K: What is your overall strategy in all of this?