Several times a week my cell phone receives the telephonic equivalent of spam: A robocall. On each occasion the call seems to come from a local number, but when I answer there is that telltale pause followed by an automated voice pitching some product or service. So when I heard from a reader who chose to hang on the line and see where one of these robocalls led him, I decided to dig deeper. This is the story of that investigation. Hopefully, it will inspire readers to do their own digging and help bury this annoying and intrusive practice. 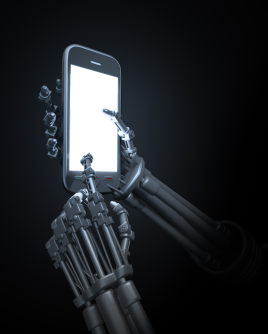 The reader — Cedric (he asked to keep his last name out of this story) had grown increasingly aggravated with the calls as well, until one day he opted to play along by telling a white lie to the automated voice response system that called him: Yes, he said, yes he definitely was interested in credit repair services.

“I lied about my name and played like I needed credit repair to buy a home,” Cedric said. “I eventually wound up speaking with a representative at creditfix.com.”

The number that called Cedric — 314-754-0123 — was not in service when Cedric tried it back, suggesting it had been spoofed to make it look like it was coming from his local area. However, pivoting off of creditfix.com opened up some useful avenues of investigation.

Creditfix is hosted on a server at the Internet address 208.95.62.8. According to records maintained by Farsight Security — a company that tracks which Internet addresses correspond to which domain names — that server hosts or recently hosted dozens of other Web sites (the full list is here).

Most of these domains appear tied to various credit repair services owned or run by a guy named Michael LaSala and registered to a mail drop in Las Vegas. Looking closer at who owns the 208.95.62.8 address, we find it is registered to System Admin, LLC, a Florida company that lists LaSala as a manager, according to a lookup at the Florida Secretary of State’s office.

An Internet search for the company’s address turns up a filing by System Admin LLC with the U.S. Federal Communications Commission (FCC). That filing shows that the CEO of System Admin is Martin Toha, an entrepreneur probably best known for founding voip.com, a voice-over-IP (VOIP) service that allows customers to make telephone calls over the Internet.

Emails to the contact address at Creditfix.com elicited a response from a Sean in Creditfix’s compliance department. Sean told KrebsOnSecurity that mine was the second complaint his company had received about robocalls. Sean said he was convinced that his employer was scammed by a lead generation company that is using robocalls to quickly and illegally gin up referrals, which generate commissions for the lead generation firm.

Robocalls are permitted for political candidates, but beyond that if the recording is a sales message and you haven’t given your written permission to get calls from the company on the other end, the call is illegal. According to the Federal Trade Commission (FTC), companies are using auto-dialers to send out thousands of phone calls every minute for an incredibly low cost.

“The companies that use this technology don’t bother to screen for numbers on the national Do Not Call Registry,” the FTC notes in an advisory on its site. “If a company doesn’t care about obeying the law, you can be sure they’re trying to scam you.”

Mr. Toha confirmed that Creditfix was one of his clients, but said none of his clients want leads from robocalls for that very reason. Toha said the problem is that many companies buy marketing leads but don’t always know where those leads come from or how they are procured.

“A lot of times clients don’t know the companies that the ad agency or marketing agency works with,” Toha said. “You submit yourself as a publisher to a network of publishers, and what they do is provide calls to marketers.”

Robby Birnbaum is a debt relief attorney in Florida and president of the National Association of Credit Services Organizations. Birnbaum said no company wants to buy leads from robocalls, and that marketers who fabricate leads this way are not in business for long.

But he said those that end up buying leads from robocall marketers are often smaller mom-and-pop debt relief shops, and that these companies soon find themselves being sued by what Birnbaum called “frequent filers,” lawyers who make a living suing companies for violating laws against robocalls.

“It’s been a problem in this industry for a while, but robocalls affect every single business that wants to reach consumers,” Birnbaum said. He noted that the best practice is for companies to require lead generators to append to each customer file information about how and from where the lead was generated.

“A lot of these lead companies will not provide that, and when my clients insist on it, those companies have plenty of other customers who will buy those leads,” Birnbaum said. “The phone companies can block many of these robocalls, but they don’t.”

That may be about to change. The FCC recently approved new rules that would let phone companies block robocallers from using numbers they aren’t supposed to be using.

“If a robocaller decides to spoof another phone number — making it appear that they’re calling from a different line to hide their identity — phone providers would be able to block them if they use a number that clearly can’t exist because it hasn’t been assigned or that an existing subscriber has asked not to have spoofed,” reads a story at The Verge.

The FCC estimates that there are more than 2.4 billion robocalls made every month, or roughly seven calls per person per month. The FTC received nearly 3.5 million robocall complaints in fiscal year 2016, an increase of 60 percent from the year prior.

The newest trend in robocalls is the “ringless voicemail,” in which the marketing pitch lands directly in your voicemail inbox without ringing the phone. The FCC also is considering new rules to prohibit ringless voicemails.

Readers may be able to avoid some marketing calls by registering their mobile number with the Do Not Call registry, but the list appears to do little to deter robocallers. If and when you do receive robocalls, consider reporting them to the FTC.

In addition, there are a number of third-party mobile apps designed to block spammy calls, such as Nomorobo and TrueCaller.