For several months I’ve been poking at a decent-sized spam botnet that appears to be used mainly for promoting adult dating sites. Having hit a wall in my research, I decided it might be good to publish what I’ve unearthed so far to see if this dovetails with any other research out there.

In late October 2016, an anonymous source shared with KrebsOnSecurity.com a list of nearly 100 URLs that — when loaded into a Firefox browser — each displayed what appeared to be a crude but otherwise effective text-based panel designed to report in real time how many “bots” were reporting in for duty.

Here’s a set of archived screenshots of those counters illustrating how these various botnet controllers keep a running tab of how many “activebots” — hacked servers set up to relay spam — are sitting idly by and waiting for instructions.

At the time, it was unclear to me how this apparent botnet was being used, and since then the total number of bots reporting in each day has shrunk considerably. During the week the above-linked screen shots were taken, this botnet had more than 1.2 million zombie machines or servers reporting each day (that screen shot archive includes roughly half of the panels found). These days, the total number of servers reporting in to this spam network fluctuates between 50,000 and 100,000.

Thanks to a tip from an anti-spam activist who asked not to be named, I was able to see that the botnet appears to be busy promoting a seemingly endless network of adult dating Web sites connected to just two companies: CyberErotica, and Deniro Marketing LLC (a.k.a. AmateurMatch).

In 2001, CyberErotica’s parent firm Voice Media settled a lawsuit with the U.S. Federal Trade Commission, which alleged that the adult affiliate program was misrepresenting its service as free while it dinged subscribers for monthly charges and made it difficult for them to cancel.

In 2010, Deniro Marketing found itself the subject of a class-action lawsuit that alleged the company employed spammers to promote an online dating service that was overrun with automated, fake profiles of young women. Those allegations ended in an undisclosed settlement after the judge in the case tossed out the spamming claim because the statute of limitations on those charges had expired.

What’s unusual (and somewhat lame) about this botnet is that — through a variety of botnet reporting panels that are still displaying data — we can get live, real-time updates about the size and status of this crime machine. No authentication or credentials needed. So much for operational security!

The “mind map” pictured below contains enough information for nearly anyone to duplicate this research, and includes the full Web address of the botnet reporting panels that are currently online and responding with live updates. I was unable to load these panels in a Google Chrome browser (perhaps the XML data on the page is missing some key components), but they loaded fine in Mozilla Firefox.

But a note of caution: I’d strongly encourage anyone interested in following my research to take care before visiting these panels, preferably doing so from a disposable “virtual” machine that runs something other than Microsoft Windows. 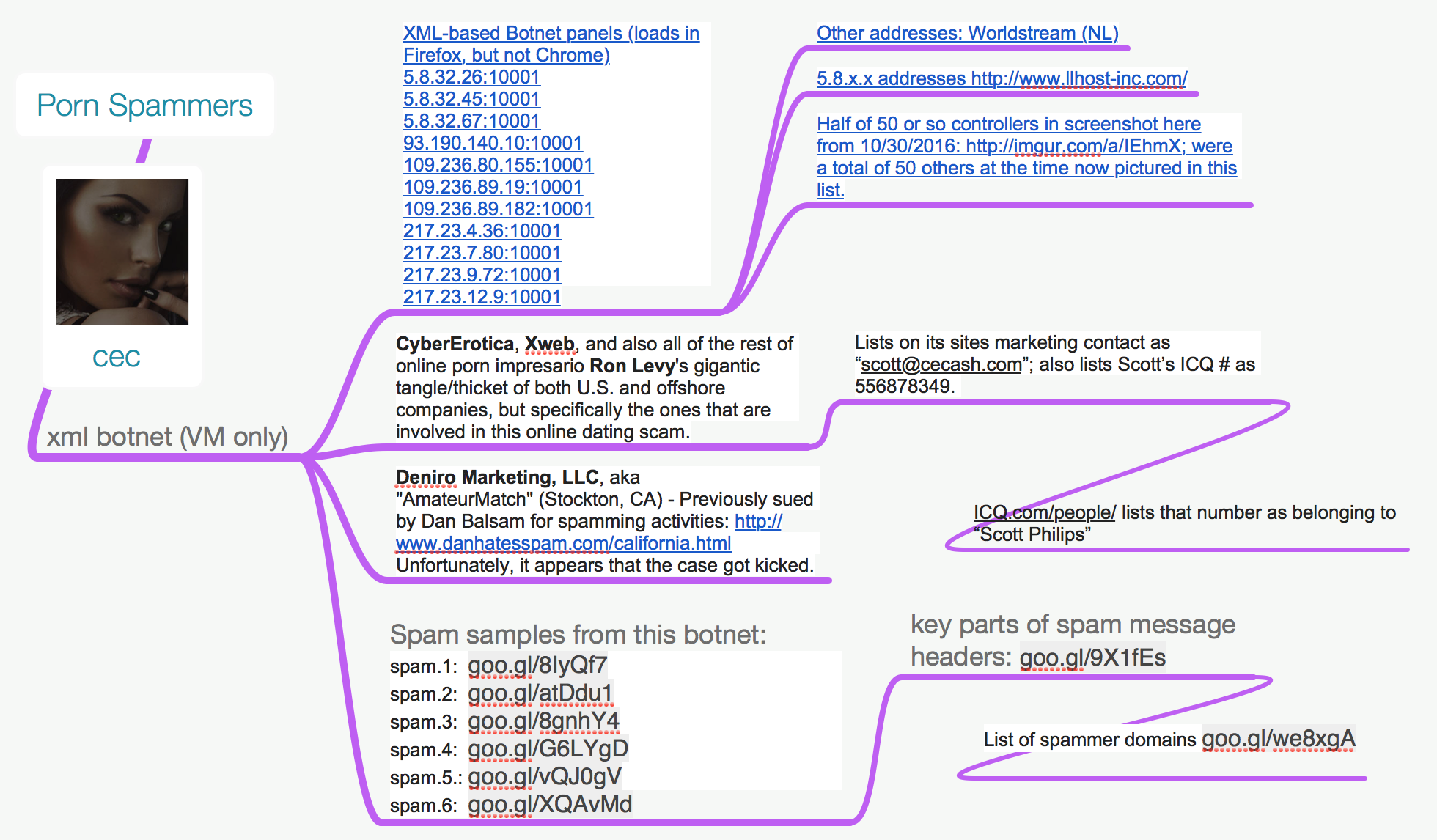 A “mind map” tracing some of the research mentioned in this post.

So how did KrebsOnSecurity tie the spam that was sent to promote these two adult dating schemes to the network of spam botnet panels that I mentioned at the outset of this post? I should say it helped immensely that one anti-spam source maintains a comprehensive, historic collection of spam samples, and that this source shared more than a half dozen related spam samples. Here’s one of them.

All of those spams had similar information included in their “headers” — the metadata that accompanies all email messages.

To learn more about what information you can glean from email headers, see this post. But for now, here’s a crash course for our purposes. The so-called “fully qualified domain names” or FQDNs in the list above can be found just to the right of the open parentheses in each line.

When this information is present in the headers (and not simply listed as “unknown”) it is the fully-verified, real name of the machine that sent the message (at least as far as the domain name system is concerned). The dotted address to the right in brackets on each line is the numeric Internet address of the actual machine that sent the message.

The information to the left of the open parentheses is called the “HELO/EHLO string,” and an email server administrator can set this information to display whatever he wants: It could be set to bush[dot]whitehouse[dot]gov. Happily, in this case the spammer seems to have been consistent in the naming convention used to identify the sending domains and subdomains.

It was also clear that this spammer controlled a great many top-level domain names, and that he had countless third-level subdomains assigned to every domain name. This type of spamming is known as “snowshoe” spamming.

Like a snowshoe spreads the load of a traveler across a wide area of snow, snowshoe spamming is a technique used by spammers to spread spam output across many IPs and domains, in order to dilute reputation metrics and evade filters,” writes anti-spam group Spamhaus in its useful spam glossary.

So, armed with all of that information, it took just one or two short steps to locate the IP addresses of the corresponding botnet reporting panels. Quite simply, one does DNS lookups to find the names of the name servers that were providing DNS service for each of this spammer’s second-level domains.

With that list of IP addresses in hand, a trusted source volunteered to perform a series of scans on the addresses using “Nmap,” a powerful and free tool that can map out any individual virtual doorways or “ports” that are open on targeted systems. In this case, an Nmap scan against that list of IPs showed they were all listening for incoming connections on Port 10001.

From there, I took the IP address list and plugged each address individually into the URL field of a browser window in Mozilla Firefox, and then added “:10001” to the end of the address. After that, each address happily loaded a Web page displaying the number of bots connecting to each IP address at any given time.

At the time, the spam being relayed through these systems was advertising sites that tried to get visitors to sign up for online chat and dating sites apparently affiliated with Deniro Marketing and CyberErotica.

Seeking more information, I began searching the Web for information about CyberErotica’s affiliate offerings and I found that the affiliate program’s marketing division is run by a guy who uses the email address [email protected].

A Google search quickly reveals that [email protected] also advertises he can be reached using the ICQ instant messenger address of 55687349. I checked icq.com’s member lookup page, and found the name attached to ICQ# 55687349 is “Scott Philips.”

In 2010, Scott Gregory Phillips was fined AUD $2 million for running a business that employed people to create fake profiles on dating websites in a bid to obtain the mobile phone numbers of dating website users. Phillips’ operation then sent SMS texts such as “get laid, text your number to…”, and then charged $5 on the mobile accounts of people who replied.

Phillips’ Facebook page and Quora profile would have us believe he has turned his life around and is now making a living through day trading. Reached via email, Phillips said he is a loyal reader who long ago quit the spam business.

“As far as I know the spam industry is 100% botnet these days, and not a viable proposition for adult sites,” he told KrebsOnSecurity.

Well, it’s certainly a viable proposition for some spammer. The most frustrating aspect of this research is that — in spite of the virtually non-existent operational security employed by whoever built this particular crime machine, I still have no real data on how the botnet is being built, what type of malicious software may be involved, or who’s responsible.

If anyone has additional research or information on this botnet, please don’t hesitate to leave a comment below or get in touch with me directly.