It’s notable whenever cybercime spills over into real-world, physical attacks. This is the story of a Russian security firm whose operations were pelted with Molotov cocktail attacks after exposing an organized crime gang that developed and sold malicious software to steal cash from ATMs. 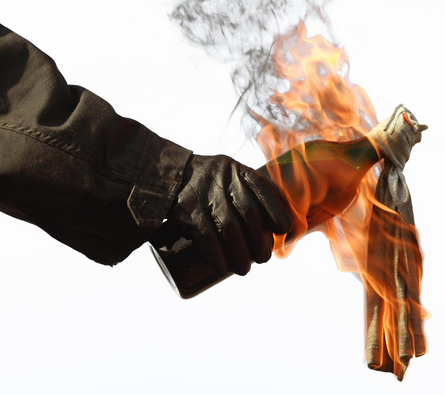 The threats began not long after December 18, 2013, when Russian antivirus firm Dr.Web posted a writeup about a new Trojan horse program designed to steal card data from infected ATMs. Dr.Web received an email warning the company to delete all references to the ATM malware from its site.

“Hundreds of criminal organizations throughout the world can lose their earnings. You have a WEEK to delete all references about ATM Skimmer from your web resource. Otherwise syndicate will stop cash-out transactions and send criminal for your programmers’ heads. The end of Doctor Web will be tragic.”

In an interview with KrebsOnSecurity, Dr.Web CEO Boris Sharov said the company did not comply with the demands. On March 9, 2014, someone threw a Molotov cocktail at the office of a third-party company that was distributing Dr.Web’s ATM Shield product. Shortly after that, someone attacked the same office again. Each time, the damage was minimal, but it rattled company employees nonetheless.

“Dear Dr.Web, the International carder syndicate has warned you about avoidance of interference (unacceptable interference) in the ATM sphere. Taking into account the fact that you’ve ignored syndicate’s demands, we employed sanctions. To emphasis the syndicate’s purpose your office at Blagodatnaya st. was burnt twice.

If you don’t delete all references about atmskimmer viruses from your products and all products for ATM, the International carder syndicate will destroy Doctor Web’s offices throughout the world, In addition, syndicate will lobby the Prohibition of usage of Russian anti-viruses Law in countries that have representation offices of the syndicate under the pretext of protection against Russian intelligence service.”

After a third attack on the St. Petersburg office, a suspect who was seen running away from the scene of the attack was arrested but later released because no witnesses came forward to confirm he was the one who threw the bomb.

“This is an office where we have much more security than any other, but also many more visitors,” he said. “We had been on high alert after the fire bombings, and we’ve never had intrusions before and never had them after this. But during that period, we had three attempts to enter the perimeter and to do something bad, but I won’t go into details about that.”

Sharov said Dr.Web analysts believe the group that threatened the attacks were not cyber thieves themselves but instead an organized group of programmers that had sold — but not yet delivered — a crimeware product to multiple gangs that specialize in cashing out hacked ATM cards.

“We think this group got very nervous by the fact that we had published exactly what they’d done, and it was very untimely for them, they were really desperate,” Sharov said. “We believe our reports came out just after development of the ATM Trojan had finished but before it was released to customers.”

Sharov said he also believes that the group of malware programmers who sent the threats weren’t the same miscreants who threw the Molotov cocktails. Rather, Dr.Web maintains that those attacks were paid for and ordered over the Internet, for execution by strangers who answered a criminal help wanted ad.

“We are completely sure it was ordered [over the] Internet, through a black market where you can order almost any crime,” Sharov said, again declining to be more specific. “What we saw was some people from St. Petersburg throwing Molotov cocktails, running away from the guards. But those people were not from the IT criminal environment. All the attacks had been ordered by Internet. And since they never succeeded against our office, it showed us that not much money was paid for these attacks.”

Dr.Web believes the criminal programmers who hired the attacks on its properties and partners were operating out of Ukraine, in part because of the facts surrounding another fire in its Kiev office on April 14, 2014. Sharov said that fire was not started intentionally, but instead was the result of an electrical issue on a floor not occupied by Dr.Web.

“The fire squad came quickly and our office was just damaged a little bit by the water,” he recalled. “Very soon after that, we received another threat with a photograph of entrance to the Kiev office, and it said another fire was set there. That photograph gave away for us the fact that the team was somewhere in the Ukraine. Nobody had any published any photograph of the attacks on St. Petersburg or Moscow. The fact that they published that and tried to present the case that it was their [doing], they were not well informed.”

Not long after that incident, Sharov said his office got confirmation from a bank in Moscow that the team behind on the ATM Trojan that caused all the ruckus was operating out of Kiev, Ukraine.

In the 18 months since then, the number of ATM-specific Trojans has skyrocketed, although the attackers seem to be targeting mainly Russian, Eastern European and European banks with their creations. For more the spread and sophistication of ATM malware, see:

Gang Hacked ATMs from Inside Banks