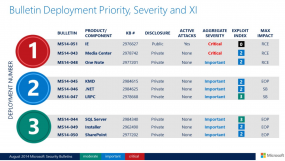 Two of the nine update bundles Microsoft released today earned the company’s most-dire “critical” label, meaning the vulnerabilities fixed in the updates can be exploited by bad guys or malware without any help from users. A critical update for Internet Explorer accounts for the bulk of flaws addressed this month, including one that was actively being exploited by attackers prior to today, and another that was already publicly disclosed, according to Microsoft.

Other Microsoft products fixed in today’s release include Windows Media Center, One Note, SQL Server and SharePoint. Check out the Technet roundup here and the Microsoft Bulletin Summary Web page at this link.

There are a couple other important changes from Microsoft this month: The company announced that it will soon begin blocking out-of-date ActiveX controls for Internet Explorer users, and that it will support only the most recent versions of the .NET Framework and IE for each supported operating system (.NET is a programming platform required by a great many third-party Windows applications and is therefore broadly installed).

These changes are both worth mentioning because this month’s patch batch also includes Flash fixes (an ActiveX plugin on IE) and another .NET update. I’ve had difficulties installing large Patch Tuesday packages along with .NET updates, so I try to update them separately. To avoid any complications, I would recommend that Windows users install all other available recommended patches except for the .NET bundle; after installing those updates, restart Windows and then install any pending .NET fixes).

Finally, I should note that Microsoft released a major new version (version 5) of its Enhanced Mitigation Experience Toolkit (EMET), a set of tools designed to protect Windows systems even before new and undiscovered threats against the operating system and third-party software are formally addressed by security updates and antimalware software. I’ll have more on EMET 5.0 in an upcoming blog post (my review of EMET 4 is here) but this is a great tool that can definitely help harden Windows systems from attacks. If you already have EMET installed, you’ll want to remove the previous version and reboot before upgrading to 5.0.

Adobe’s critical update for Flash Player fixes at least seven security holes in the program. Which version of Flash you should have on your system in order to get the protection from these latest fixes depends on which operating system and which browser you use, so consult the (admittedly complex) chart below for your appropriate version number. 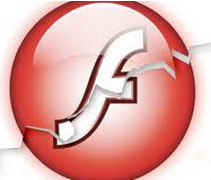 To see which version of Flash you have installed, check this link. IE10/IE11 on Windows 8.x and Chrome should auto-update their versions of Flash, although my installation of Chrome says it is up-to-date and yet is still running v. 14.0.0.145 (with no outstanding updates available, and no word yet from Chrome about when the fix might be available).

Windows users who browse the Web with anything other than Internet Explorer may need to apply this patch twice, once with IE and again using the alternative browser (Firefox, Opera, e.g.). If you have Adobe AIR installed (required by some programs like Tweetdeck and Pandora Desktop), you’ll want to update this program. AIR ships with an auto-update function that should prompt users to update when they start an application that requires it; the newest, patched version is v. 14.0.0.137 for Windows, Mac, and Android. 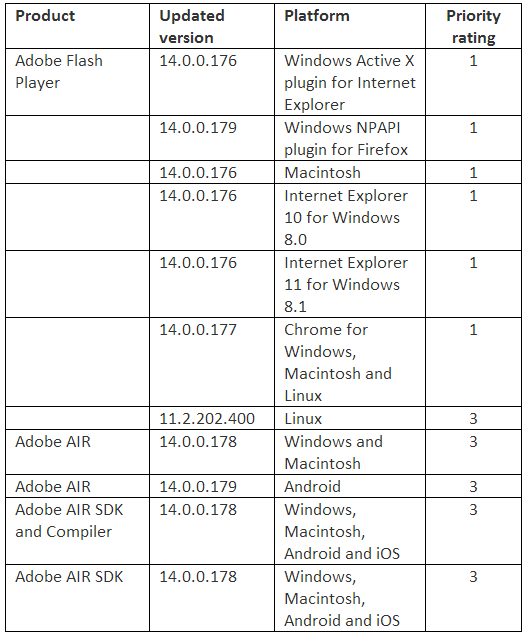 Adobe said it is not aware of any exploits in the wild that target any of the issues addressed in this month’s Flash update. However, the company says there are signs that attackers are are already targeting the lone bug fixed in an update released today for Windows versions of Adobe Reader and Acrobat (Adobe Reader and Acrobat for Apple’s OS X are not affected).

Experience technical issues during or after applying any of these updates, or with the instructions above? Please feel free to sound off in the comments below.