Microsoft said today that attackers are exploiting a previously unknown, unpatched vulnerability in all supported versions of its Internet Explorer Web browser. The company said it is working on an official patch to plug the security hole, but in the meantime it has released a stopgap fix to help protect affected customers. 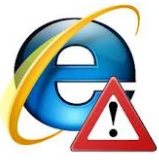 Microsoft said it is aware of targeted attacks that attempt to exploit the vulnerability (CVE-2013-3893) in IE 8 and IE 9 versions of the default Windows browser. According to an advisory issued today, the flaw is a remote code bug, which means malware or miscreants could use it install malware just by coaxing IE users to browse a hacked or malicious Web site.

Update: As several readers have already noted in the comments, this Fix It solution is for 32-bit versions of IE only. In 64-bit Windows, you can tell whether the browser you’re using is a 32-bit or 64-bit version by opening the Windows Task Manager (Ctrl+Shift+Esc) and clicking the Processes tab. The number that appears after the process name (in this case, iexplore.exe) indicates the version in use.