Sometimes it takes a security scare to help improve your overall security posture. Case in point: Over the holidays, I learned that our alarm system — one of the most widely used home security systems in America — contains a default code that disables the alarm. Although entering this code simultaneously alerts the police that an intruder is in the house, it also could give thieves just enough time to get away with your valuables without alerting the neighbors. 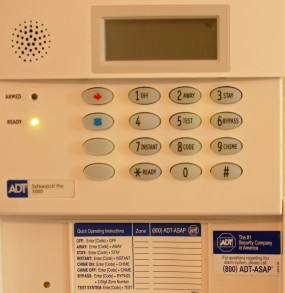 Over the holidays, I lost my keychain. On said chain was a very expensive key fob for unlocking and starting our car, the keys to our front door, and a remote control that arms and disarms the alarm system. For several days, the wife and I searched frantically and repeatedly for the keys. Needless to say, I didn’t leave the house the whole time. In the hopes of perhaps disabling the alarm keyfob myself, I downloaded the user manual for my alarm system (a Safewatch Pro 3000), but I could not figure out a way to complete the process.

After of the fourth day of failing to locate the missing keys, we decided it was time to call a locksmith and ADT, our alarm company. The ADT technician arrived promptly and was extremely fast, courteous and helpful. But he said he couldn’t remove the fob without plugging in an external keyboard that he had on hand.

As he worked, I asked him about a feature of the alarm system that I’d read about in the manual: A duress code. Simply put, a duress code is a secondary, covert signal designed to be entered on the alarm keypad in the event that an attacker or robber ambushes you at home and forces you to disarm the system. A duress code will appear to disarm the system, but it will also send a silent panic alert to the ADT monitoring station that a potentially hostile intruder has entered the home.

I asked the technician how difficult it would be to set up a duress code for my system. He informed me that there was already one programmed into my unit, and that ADT technicians routinely set all systems like mine with the same default duress code: 2-5-8-0, the four digits that run straight down the middle of the keypad.

My temporary shock was interrupted by a phone call, and before I knew it the technician was done and heading to his next appointment. Later that evening, several Internet searches confirmed the technician’s statement. Thankfully, ADT helped me change the code to one of my choosing, but it took some trial and error via ADT’s phone support staff. The ADT support lady told me that my alarm panel indeed was supposed to be configured by the technician with a duress code of 2-5-8-0.

A duress code is an excellent idea, but default codes are almost always bad news. I was never told about this feature when the technician installed the system, and it is undocumented in the user manual. If you have a home security system, it might be a good idea to ask your alarm company if your system has a default duress code.

As luck would have it, we did ultimately find the lost key set — wedged deep between the seats in our car — but only after we’d already nullified two out of the three keys.