Last month’s post examining the top email-based malware attacks received so much attention and provocative feedback that I thought it was worth revisiting. I assembled it because victims of cyberheists rarely discover or disclose how they got infected with the Trojan that helped thieves siphon their money, and I wanted to test conventional wisdom about the source of these attacks.

While the data from the past month again shows why that wisdom remains conventional, I believe the subject is worth periodically revisiting because it serves as a reminder that these attacks can be stealthier than they appear at first glance.

The threat data draws from daily reports compiled by the computer forensics and security management students at the University of Alabama at Birmingham. The UAB reports track the top email-based threats from each day, and include information about the spoofed brand or lure, the method of delivering the malware, and links to Virustotal.com, which show the number of antivirus products that detected the malware as hostile (virustotal.com scans any submitted file or link using about 40 different antivirus and security tools, and then provides a report showing each tool’s opinion).

As the chart I compiled above indicates, attackers are switching the lure or spoofed brand quite often, but popular choices include such household names as American Airlines, Ameritrade, Craigslist, Facebook, FedEx, Hewlett-Packard (HP), Kraft, UPS and Xerox. In most of the emails, the senders spoofed the brand name in the “from:” field, and used embedded images stolen from the brands being spoofed.

The one detail most readers will probably focus on most this report is the atrociously low detection rate for these spammed malware samples. On average, antivirus software detected these threats about 22 percent of the time on the first day they were sent and scanned at virustotal.com. If we take the median score, the detection rate falls to just 17 percent. That’s actually down from last month’s average and median detection rates, 24.47 percent and 19 percent, respectively.

Unlike most of poisoned missives we examined last month — which depended on recipients to click a link that takes them to a site equipped with an exploit kit designed to invisibly download and run malicious software — a majority of attacks in the past 30 days worked only when the recipient opened a zipped executable file. 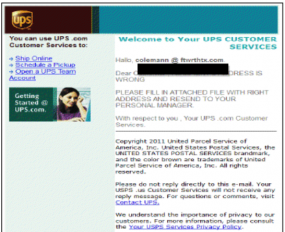 I know many readers will probably roll their eyes and mutter that anyone with half a brain would know that you don’t open executable (.exe) files sent via email. But many of versions of Windows will hide file extensions by default, and the attackers in these cases frequently change the icon associated with the zipped executable file so that it appears to be a Microsoft Word or PDF document. And, although I did not see this attack in the examples listed above, attackers could use the built-in right-to-left override feature of Windows to make a .exe file look like a .doc.

Obviously, a warning that the user is about to run an executable file should pop up if he clicks a .exe file disguised as a Word document, but we all know how effective these warnings are (especially if the person already believes the file is a Word doc).

There was at least one interesting attack detailed above in which the malicious email was booby-trapped with an HTML message that would automatically redirect the recipient’s email client to a malicious exploit site if that person was unfortunate enough to have merely opened the missive in an client that had HTML reading enabled. Many Webmail providers now block rendering of most HTML content by default, but it is often enabled or users sometimes enable it manually on email client software like Microsoft Outlook or Mozilla Thunderbird.

A copy of the spreadsheet pictured above is available in Microsoft Excel and PDF formats.