Hardly a week goes by without news of some widespread compromise in which thousands of Web sites that share a common vulnerability are hacked and seeded with malware. Media coverage of these mass hacks usually centers on the security flaw that allowed the intrusions, but one aspect of these crimes that’s seldom examined is the method by which attackers automate the booby-trapping and maintenance of their hijacked sites. 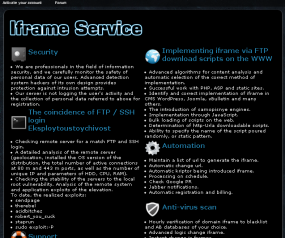 Regular readers of this blog may be unsurprised to learn that this is another aspect of the cybercriminal economy that can be outsourced to third-party services. Often known as “iFramers,” such services can simplify the task of managing large numbers of hacked sites that are used to drive traffic to sites that serve up malware and browser exploits.

At the very least, a decent iFramer service will allow customers to verify large lists of file transfer protocol (FTP) credentials used to administer hacked Web sites, scrubbing those lists of invalid credential pairs. The service will then upload the customer’s malware and malicious scripts to the hacked site, and check each link to ensure the trap is properly set.

A huge percentage of malware in the wild today has the built-in ability to steal FTP credentials from infected PCs. This is possible because people who administer Web sites often use FTP software to upload files and images, and allow those programs to store their FTP passwords. Thus, many modern malware variants will simply search for popular FTP programs on the victim’s system and extract any stored credentials. 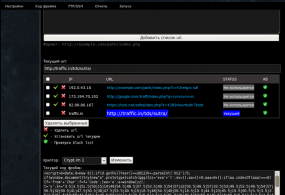 The customer interface for the iFramer service.

Some services, like the one offered at iframeservice.net (pictured above and at left), offer a menu of extras to help customers maintain their Web-based minefields. Iframeservice.net attempts to gain a more permanent foothold on all sites for which it is given FTP credentials, testing the sites for additional security vulnerabilities (root exploits) that may grant administrative privileges on the site’s Web server.

This service also promises to help customers stay one step ahead of antivirus companies, by monitoring URL blacklists and generating customer alerts when boobytrapped pages get flagged as malicious. In addition, it offers the automated ability to obfuscate the true destination of malicious links as a way to confuse both antivirus scanners and the legitimate administrators of the hacked sites.

A recent compromise I helped a friend deal with reminds me of a stubborn fact about hacked sites that seems relevant here. Just as PC infections can result in the theft of FTP credentials, malware infestations also often lead to the compromise of any HTML pages stored locally on the victim’s computer. Huge families of malware have traditionally included the ability to inject malicious scripts into any and all Web pages stored on host machine. In this way, PC infections can spread to any Web sites that the victim manages when the victim unknowingly uploads boobytrapped pages to his Web site.

Obviously, the best way to avoid these troubles is to ensure that your system doesn’t get compromised in the first place. But if your computer does suffer a malware infection and you manage a Web site from that machine, it’s good idea to double check any HTML pages you may have stored locally and/or updated on your site since the compromise, and to change the password used to administer your Web site (using a strong password, of course).