A deep sense of doubt and dread began to sink in halfway through our journey down a long, lonely desert highway from just outside Austin to coastal Texas. We were racing against the clock (we’d just scarfed down our third meal in a row at a roadside Subway shop), yet my minivan companions — a filmmaker from California and a husband-and-wife camera crew — seemed pleased with the footage we’d collected so far. I was far less sanguine about our prospects, and was almost certain that our carefully-laid plans to ambush a money mule on camera were about to unravel. 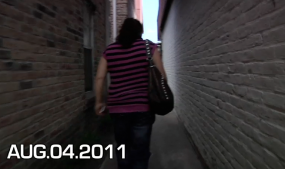 The scheme was hatched by Berkeley writer/director Charles Koppelman, who’d emailed me in mid-2011 about the possibility of catching some money mules on camera for a documentary he’s working on called Zero Day. Koppelman said the money shot would be a mule coming out of a bank with a wad of cash in hand, but that he’d settle for an old-fashioned sit-down interview.

At the time, I was working with a source who was injected into the communications networks of several money mule recruitment gangs. These miscreants specialize in hiring willing and unwitting “mules” through work-at-home job scams. The mules then are asked to process bank transfers that help organized cyber thieves launder money stolen from small businesses victimized by cybercrime. The networks my source was monitoring indicated the gang was grooming between 75 and 100 mules across the country on any given day, and that they were sending fraudulent transfers to mules almost daily.

I told Charles that for such a plan to work, we’d need to focus on areas that typically held the most number of mules per capita, and that meant somewhere in Florida or Texas. When my source indexed the mules and sorted them by hometown, we discovered that there were five mules being groomed for payments within about 200 miles of Austin, Texas. If we rented a car and checked in with my source on a regular basis, we might be able to secure the footage he was after, I suggested.

But I cautioned Koppelman that I gave our plan about a 20 percent chance of working. I predicted that most of the mules would quit, screw up the transfer task, or be used and discarded by the time we flew down there and actually hit the road. Indeed, when we reached our fleabag motel just south of Austin on Aug. 3, 2011, my prognostication had almost come true entirely: We were down to one last money mule: Geridana, a young, unemployed single mother of two from Webster, a small town of about 9,000 residents in southeastern Texas.

On the morning of Aug. 4, we piled into the minivan again and raced down to Webster. We didn’t attempt to make contact with her until we were parked outside of her apartment complex, which was next door to a bail bonds shop. Turns out that Geridana was a bit of an oddity: The $9,000+ the thieves had just sent her was actually the fourth such transfer that Geridana had processed in as many weeks. The most pathetic aspect of the whole scheme? She never got paid her promised monthly salary or per-task commissions.

I’ll stop the story here, because I don’t want to spoil the movie. That is, if it ever attracts enough funding to be finished. The film is co-financed by BBC Storyville, but Koppelman and his son Walker just launched a Kickstarter campaign to raise $20,000 to ensure  continued filming of the project. A short introduction to their effort (including a scene starring Yours Truly) is available in the teaser video clip below. The filmmakers are also working with New York Times reporter John Markoff, Reuters reporter Joe Menn, and author Misha Glenny.