Given the heightened security surrounding air travel these days, it may be hard to believe that fraudsters would try to board a plane using stolen tickets. But incredibly, there are a number of criminal travel agencies doing business in the underground, and judging from the positive feedback left by patrons, business appears to be booming.

Ad above says: Maldives Turkey Goa Bora-Bora, Carribes, Any country, any hotels and resorts of the world.

The tickets often are purchased at the last minute and placed under the criminal buyer’s real name. The reservations are made using either stolen credit cards or hijacked accounts belonging to independent contractors in the travel industry.  Customers are charged a fraction of the cost of the tickets and/or reservations, typically between 25 and 35 percent of the actual cost.

Criminal travel services are contributing to a recent spike in airline ticket fraud. In December, the Airlines Reporting Corporation, an industry clearinghouse, said it was seeing a marked increase in unauthorized tickets issued. Between August and November of last year, 113 incidents of fraudulently booked tickets were reported to ARC, up from just 18 such incidents reported in all of 2010. The aggregate face value of the unauthorized tickets in 2011 was more than $1 million. The ARC believes the increase in fraud is mainly due to an surge in phishing emails targeting travel agency employees and contractors.

Some of the travel agencies in the criminal underground are full-service, pitching package deals that  include airfare, car rentals and even hotel stays. A hacker using the nickname “Yoshimo” on one prominent fraudster forum offers “80-95 percent working flight tickets in most countries (some restrictions apply),” for 25 percent of the original price, and 40 percent of the price for carded hotel stays and car rentals. He has been offering this service for more than two years, and has at least 275 positive reviews from current and former customers.

At first glance, it may seem unlikely that your typical paranoid fraudster would dare take advantage of such a service. But according to the proprietors, few customers are ever stopped, and those that are can simply claim that they were victims of fraud. At least that’s how it’s explained by “Jeferi,” a criminal travel agent who has set up shop on the fraudster forum Kurupt.su. 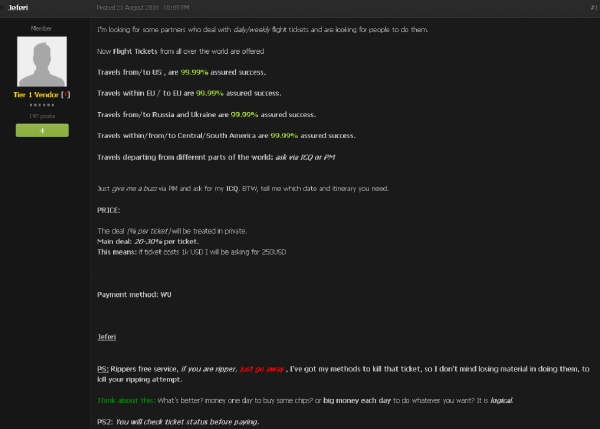 To assuage fears of potential customers, Jeferi allows buyers to verify the status of their e-tickets the day of travel before paying for them. And of course, none of these bogus travel services accept credit cards: They only take payment via virtual currencies, such as WebMoney and Liberty Reserve.

“The story is simple,” Jeferi explained in a discussion thread that spans five pages and includes questions from dozens of skeptical and interested members. “The thing is, you are thinking as a criminal. Think about yourself as a victim of an online scam. You saw an advertisement of a “Travel Agency” in the Internet, and it seemed interesting. So you contacted them through a forum and finally arranged a deal. The travel agency told you that the tickets were last-hour tickets and that they were affiliate with the airlines, so they could offer these kinds of prices, and you thought they were legit. OMG! I never thought it was going to be a scam! Bastards!”

Chalk it up to professional pride or just greed, but it seems that many people who steal for a living have difficulty legitimately purchasing anything online. There is probably also a strong emotional jolt that these guys receive from getting a stranger to pick up the tab for a tropical vacation. As Jeferi says in his ad: “What’s better? Money for one day to buy some chips? Or Big Money each day to do whatever your want?”