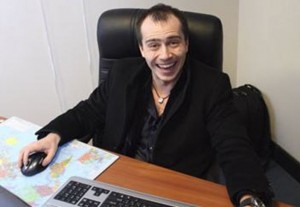 An undated photo of Vrublevsky

Vrublevsky, 32, is probably best known as the co-owner of the Rx-Promotion rogue online pharmacy program. His company also consistently has been involved in credit card processing for — and in many cases setting up companies on behalf of — rogue anti-virus or “scareware” scams that use misleading PC security alerts in a bid to frighten people into purchasing worthless security software.

As I reported earlier this week, Vrublevsky fled the country after the arrest of a suspect who confessed that he was hired by Vrublevsky to launch a debilitating cyber attack against Assist, a top ChronoPay competitor. According to Russian news organizations, the ChronoPay executive wanted to sideline rival payment processing firms who were competing for a lucrative contract to process payments for Aeroflot, Russia’s largest airline. Sources close to the investigation said Vrublevsky was arrested at the Sheremetievo airport outside of Moscow as he returned from a trip to the Maldives.