Details about the recent cyber attacks against security firm RSA suggest the assailants may have been taunting the industry giant and the United States while they were stealing secrets from a company whose technology is used to secure many banks and government agencies. 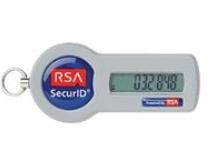 Earlier this month, RSA disclosed that “an extremely sophisticated cyber attack” targeting its business unit “resulted in certain information being extracted from RSA’s systems that relates to RSA’s SecurID two-factor authentication products.” The company was careful to caution that while data gleaned did not enable a successful direct attack on any of its SecurID customers, the information “could potentially be used to reduce the effectiveness of a current two-factor authentication implementation as part of a broader attack.”

That disclosure seems to have only fanned the flames of speculation swirling around this story, and a number of bloggers and pundits have sketched out scenarios of what might have happened. Yet, until now, very little data about the attack itself has been made public.

Earlier today, I had a chance to review an unclassified document from the U.S. Computer Emergency Readiness Team (US-CERT), which includes a tiny bit of attack data: A list of domains that were used in the intrusion at RSA.

Some of the domain names on that list suggest that the attackers had (or wanted to appear to have) contempt for the United States. Among the domains used in the attack (extra spacing is intentional in the links below, which should be considered hostile): 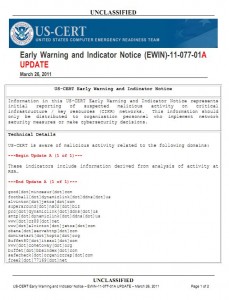 Note that the last domain listed includes the abbreviation “PRC,” which could be a clever feint, or it could be Chinese attackers rubbing our noses in it, as if to say, “Yes, it was the People’s Republic of China that attacked you: What are you going to do about it?”

Most of the domains trace back to so-called dynamic DNS providers, usually free services that allow users to have Web sites hosted on servers that frequently change their Internet addresses. This type of service is useful for people who want to host a Web site on a home-based Internet address that may change from time to time, because dynamic DNS services can be used to easily map the domain name to the user’s new Internet address whenever it happens to change.

Unfortunately, these dynamic DNS providers are extremely popular in the attacker community, because they allow bad guys to keep their malware and scam sites up even when researchers mange to track the attacking IP address and convince the ISP responsible for that address to disconnect the malefactor. In such cases, dynamic DNS allows the owner of the attacking domain to simply re-route the attack site to another Internet address that he controls.

Sam Norris, founder of ChangeIP.com, the dynamic DNS provider responsible for many of the root domains on the US-CERT’s list, said he terminated all of the accounts on the list as soon as US-CERT published the list on March 18 (although that version of the list does not mention the RSA connection). Norris soon was contacted via email by the account holder who used the prc. dynamiclink. ddns. us domain. Norris said the account holder wanted to know the reason his domain was killed.

“This guy has been emailing me, asking me for the account back, saying things like ‘Hey, I had important stuff on that domain, and I need to get it back,’” Norris said. “The bad guys are definitely interested in getting it back, which means we probably cut off their communications or made it so that they couldn’t clean up their trail afterward.”

Much of the public speculation about the attack on RSA so far has invoked the term “advanced persistent threat” or APT, which is security industry shorthand for “We’re pretty sure it came from China.” At least as far as the domains that were routed through ChangeIP.com are concerned, that assessment appears to hold up (with the usual caveat that attackers can route their traffic through machines anywhere in the world in a bid to disguise their true location).

“Ninety nine percent of the time, when these guys logged in to one of their accounts to change the IP address for a domain, they were coming from a Chinese address,” Norris said. 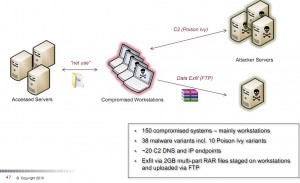 An illustration of a targeted attack that used Poison Ivy. Image: Mandiant

A closer look at some of the domains also indicates the use of some familiar attack tools that have been associated with previous targeted attacks attributed to Chinese, state-sponsored hackers. For example, one of the few domains on the list not attached to a dynamic DNS service — mincesur .com — has been a well-known download source for “Poison Ivy,” a lightweight attack tool that attackers have  used quite a bit in previous pinprick attacks (PDF) to remotely administer hacked systems and to hoover up information from those machines.

Interesting as these tidbits of data may be, they don’t answer the questions that seem to be on everyone’s minds about the RSA attack: How much information did the attackers get, and can organizations still trust SecurID tokens as an authentication mechanism? A spokesman for RSA said the company wasn’t yet ready to publicly disclose more details about the attack. Several sources say RSA recently briefed a small group of industry leaders and customers, providing further information about the attack, but those folks had to sign a non-disclosure agreement barring them from discussing the details.

Since RSA’s initial disclosure, I’ve received many emails from readers asking for my take on the attack. I’ve avoided writing about it because I didn’t have much to add to the initial reporting, which remains very speculative in the absence of more details from RSA. And as I read back over what I’ve written above, I can see this that post seems speculative as well. As for RSA’s technology, I have noted in one story after another that one-time tokens such as those generated by RSA’s SecurID key fobs are better than mere passwords for authentication, but not by much. Today’s attack tools allow the bad guys to control not only the victim’s PC, but also what the victims see in their Web browser. I have written about a number of successful attacks in which the crooks got the information they needed to defeat tokens and empty bank accounts by injecting content into the victim’s browser. The latest attack on RSA serves to increase suspicion, even if unfounded, that its products may not provide sufficient protection to the user.