If your Windows PC has been hijacked by fake anti-virus software or “scareware” anytime in the past few years, chances are good that the attack was made possible by ChronoPay, Russia’s largest processor of online payments.

Tens of thousands of documents stolen and leaked last year from ChronoPay offer a fascinating look into a company that has artfully cultivated and handsomely profited from the market for scareware, programs that infiltrate victim PCs to display fake security alerts in a bid to frighten users into paying for worthless security software. 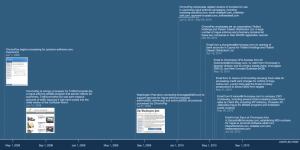 Click image for PDF version of timeline. Each entry is clickable and links to supporting documents.

In June 2009, The Washington Post published the results of a six-month investigation into ChronoPay’s high-risk business. At the time, ChronoPay was one of a handful of processors for Pandora Software, the most prevalent brand of rogue software that was besieging consumers at the time. That story drew links between ChronoPay and an entity called Innovagest2000, which was listed as the technical support contact in the end-user license agreements that shipped with nearly all Pandora rogue anti-virus products.

When I confronted ChronoPay’s CEO Pavel Vrublevsky in 2009 about the apparent ties between Innovagest and his company, he insisted that there was no connection, and that his company’s processing services were merely being abused by scammers. But the recently leaked ChronoPay documents paint a very different picture, showing that Innovagest2000 was but one example of a cookie-cutter operation that ChronoPay has  refined and repeated over the last 24 months.

The documents show that Innovagest was a company founded by ChronoPay’s Spanish division, and that ChronoPay paid for everything, from the cost of Innovagest’s incorporation documents to the domain registration, virtual hosting and 1-800 technical and customer support lines for the company.

The same dynamic would play out with other ChronoPay “customers” that specialized in selling rogue anti-virus software. For example, leaked internal documents indicate that ChronoPay employees created two companies in Cyprus that would later be used in processing rogue anti-virus payments: Yioliant Holdings; and the strangely named Flytech Classic Distribution Ltd. ChronoPay emails show that employees also paid for domains software-retail.com and creativity-soft.com, rogue anti-virus peddling domains that were registered in the names and addresses of Yioliant Holdings and Flytech, respectively. Finally, emails also show that ChronoPay paid for the virtual hosting and telephone support for these operations. This accounting document, taken from one of the documents apparently stolen from ChronoPay, lists more than 75 pages of credit card transactions that the company processed from Americans who paid anywhere from $50 to $150 to rid their computers of imaginary threats found by scareware from creativity-soft.com (the amounts in the document are in Russian Rubles, not dollars, and the document has been edited to remove full credit card numbers and victim names).

Last month, I traveled to Moscow and had a chance to sit down with Vrublevsky at his offices. When I asked him about Innovagest, his tone was much different from the last time we discussed the subject in 2009. This may have had something to do with my already having told him that someone had leaked me his company’s internal documents and emails, which showed how integral ChronoPay was to the rogue anti-virus industry.

“By the time which correlates with your story, we didn’t know too much about spyware, and that Innovagest company that you tracked wasn’t used just for spyware only,” Vrublevsky said. “It was used for a bunch of shit.”

Vrublevsky further said that some of ChronoPay’s customers have in the past secretly sub-let the company’s processing services to other entities, who in turn used it to push through their own shady transactions. He offered, as an example, an entity that I wasn’t previously aware had been a customer of ChronoPay’s: A rogue anti-virus promotion program called TrafficConverter.biz.

As I documented in a March. 2009 story for The Washington Post, Trafficconverter.biz paid its promoters or “affiliates” hundreds of thousands of  dollars a month to pimp rogue anti-virus software. The domain Trafficconverter.biz was shut down briefly at the end of November when it was discovered that it was being sought out by millions of Microsoft Windows systems infected with the first variant of the Conficker worm, which instructed infected systems to visit that domain and download a specific file that suggested it would attempt to install rogue anti-virus software.

“That was a case where ChronoPay had a merchant account registered as an Internet payment service provider with Visa Iceland, where the same merchant account was being used by hundreds of small merchants, and one of them turned out to be the infamous TrafficConverter,” Vrublevsky explained.

But what of the leaked documents that show what appear to be ChronoPay employees setting up entire businesses that would later sell rogue anti-virus — including incorporation records, associated bank accounts, Web hosting, domain registration, telephone support and merchant accounts tied to these entities? Wasn’t ChronoPay concerned that this activity could make it appear that the company was simply building rogue anti-virus merchants from the ground up?

No, this is what high-risk payment service providers do, Vrublevsky explained.

“This is part of the service you provide,” he said. “Basically you own the companies that have those merchant IDs, plus you do customer support and everything which is related to that. And that’s how any other payment service provider does it, and you can find the same thing if you dig into companies like Wirecard, and Visa Iceland. So most payment service providers basically register the companies  themselves and monitor the whole [operation] from the inside.”

The leaked records also show ChronoPay’s high-risk division worked diligently to stay on the cutting edge of the scareware industry. In March 2010, the company began processing payments for icpp-online.com, a scam site that stole victims’ money by bullying them into paying a “pre-trial settlement” to cover a “Copyright holder fine.” As security firm F-Secure noted at the time, victims of this scam were informed that an “antipiracy foundation scanner” had found illegal torrents from the victim’s system, and those who refused to pay $400 via a credit card transaction could face jail time and huge fines. 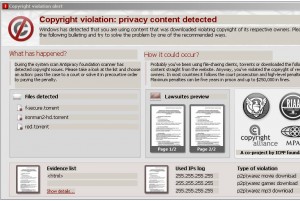 Internal ChronoPay documents show that hundreds of people fell for the scam, paying more than $400 each (the message at the top of the image indicates that the internal ChronoPay formula for counting the number of downloads and sales was generating errors, so take these numbers with a grain of salt).

ChronoPay also was the processor for a fake anti-virus product known as Shield-EC, which was processed through a merchant account tied to a company called Martindale Enterprises Ltd. Again, internal documents show that ChronoPay not only created Martindale Enterprises Ltd., and attached bank accounts to the company, but that it also paid for the domain registration, hosting and telephone support lines for shield-ec.com.

The shield-ec scareware scam was unique because the purveyors pitched it as “the result of a two-year research collaboration of programmers and analysts from Martindale Enterprises and ZeusTracker, the main center for ZeuS epidemic prevention.”

ZeusTracker is a free service run by an established security researcher, Roman Hüssy, who monitors Web addresses that are known to be associated with the distribution and management of the infamous ZeuS trojan. As Hüssy noted in a blog post at the time, the Shield-EC scareware campaign came with an interesting twist: The Web site shieldec.com was in fact hosted on a fast-flux botnet that was also being used to host at least two different servers used to control large numbers of PCs infected with ZeuS. 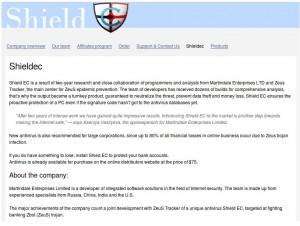 These days, Vrublevsky said, he’s hoping his company can have a go at the market for legitimate anti-virus products. When I met with him in Moscow, Vrublevsky told me about company plans to create and sell its own anti-virus product: ChronoPay Antivirus. At first I didn’t know whether to take him seriously. But then I found a document in the cache that confirmed that claim. A Russian-language document called ChronoPay AntiVirus Vision (PDF), dated June 15, 2010, details the company’s ambitions in this market.

Curious about what other domains ChronoPay currently owns? Check out this list (PDF), taken from a recent internal email that leaked from the company.