As many readers no doubt know, the Egyptian government on Thursday severed the nation’s ties with the rest of the Internet, in an apparent effort to disrupt political protests calling for an end to the 30-year rule of Egyptian leader Hosni Mubarak.

I’ve been tweeting about new developments as they arise, but I wanted to point to a few of the more dramatic graphs that different sources have drawn up to show the precipitous decline in Internet traffic and connectivity to and from Egypt as leaders there sought to isolate phone and computer networks from the rest of the world.

Arbor Networks put together this graphic, which shows what happens when 80 million people are disconnected from the Web all at once:

The Extraexploit blog looked at the Internet routing situation around Egypt before and after the disconnection, using the handy (but tricky) tool available here. This Java-based tool charts the routing activity between and among separate networks on the Internet. The first image below shows what some of the main routes to and from Egypt’s various networks looked like just before the incident. 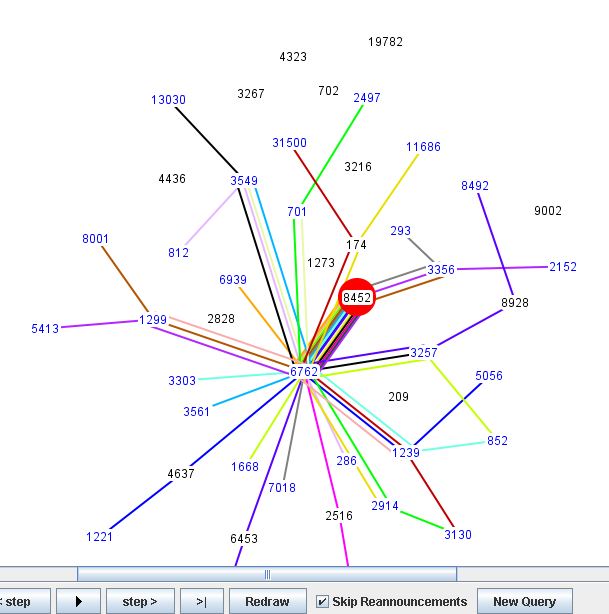 Check out the same route view from today, and it’s clear that Egypt has isolated itself from the rest of the Internet. As the folks at Renesys.com wrote, there are still a handful of Internet connections that remain live in Egypt, but the comments to that post suggest that those connections may have been left tightly in the grip of the Egyptian government. Link Egypt, Vodafone/Raya, Telecom Egypt, and Etisalat Misr — all have been blocked, Renesys found.

In response to the Egyptian government’s crackdown on protesters there, Wikileaks released new State Department cables that reveal human rights abuses and political arrests in the country. Too bad nobody in Egypt is going to be able to see those cables.

Have you discovered a graphic that shows the network isolation of Egypt in a compelling way? Post a link in the comments below, please.

Update, 11:19 a.m.: A reader wrote in with a link to a decent graph maintained by RIPE (French for “European IP Networks”), which shows the disconnection starting on Jan. 27.

Update, Jan. 29, 7:34 p.m. ET: A relatively new data leak prevention firm called Unveillance sent a pointer to their blog post, which chronicled the disconnection of Egypt from a slightly different perspective: The drop in network activity from computer systems within Egypt that were infected with malicious software or controlling other infected hosts.