Authorities in the United States and Moldova apprehended at least eight individuals alleged to have helped launder cash for an international cyber crime gang that stole more than $70 million from small to mid-sized organizations in recent months.

In Wisconsin, police arrested two young men who were wanted as part of a crackdown in late September on money mules who were in the United States on J1 student visas. The men, both 21 years old, are thought to have helped transfer money overseas that was stolen from U.S. organizations with the help of malicious software planted by attackers in Eastern Europe. 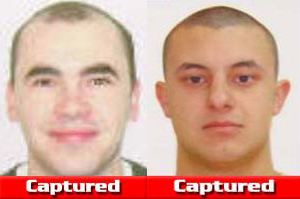 Dorin Codreanu and Lilian Adam, both originally from Moldova, are being transferred to New York, where they were charged on Sept. 30 in connection with the international money laundering scheme (hat tip to Sophos).

All six of those detained were bank employees, and one worked at the Bank of Moldova. According to Moldovan authorities, the suspects allegedly specialized in intercepting Western Union and MoneyGram payments that mules had sent to Eastern Europe after receiving bank transfers from organizations victimized by the ZeuS Trojan.

Altogether, Moldovan prosecutors are looking at 12 suspects, including a government official who is alleged to have provided the group with copies of ID cards needed to open bank accounts. That nation’s anti-corruption center said it has conducted over 30 searches at detainees’ houses, and seized at least $300,000, a gun, and two luxury cars.

Eleven of the 37 money mules charged in September in connection with these attacks are still at large. Photos of the suspects are available at this alert posted by the FBI.