The reputation attack is the latest sortie in an increasingly high-profile and high-stakes battle among spammers, online pill purveyors and those trying to shed light on their activities. Around the same time that these fake domains were registered, KrebsOnSecurity.com came under a sustained denial of service attack that traced back to Russian pill gangs.

The sites were registered just days after LegitScript finalized a deal with eNom Inc., the world’s 5th-largest domain name registrar. At the time of that agreement, roughly 40 percent of the unlicensed online pharmacies selling drugs without requiring a prescription were registered through eNom, according to Horton.

Since then, many affiliates who promote pill sites via online pharmacy affiliate programs have been scrambling to move their domains to other registrars, with varying degrees of success.

Reached via phone with the news, Horton was annoyed but not surprised, saying the action was almost certainly in retaliation for the eNom deal. He said he’s even received death threats lately in apparent response to the move.

“The bottom line is, rogue pharma types need a ‘safe haven’ for domain name registrations,” Horton said. “There are fewer and fewer of those left, and we’re playing a role in that.” 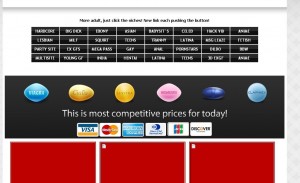 A big chunk of the domains were set up through a registrar simply called “Maxine,” which lists in its contact information a non-working number. But that number, “+718.5998172”, is the same one used to register countless pill sites pushing rogue pharmacies, such as anomedic.com.

This kind of reputation attack is typical behavior when organized crime groups sense that their turf is being threatened. Such tricks are reminiscent of the assaults against CastleCops, a once potent anti-scam community that came under a variety of reputation attacks, including DDoS sieges and thousands of dollars in bogus PayPal donations that used stolen credit cards and hijacked PayPal accounts.

I sought comment from Directi, ELB Group (the parent of the “Maxine” domain reseller mentioned above) and UK2 Group, all registrars whose services were abused to register these domains. I have yet to receive a response from any of them. However, since then, many — if not all — of the domains registered through UK2 appear to have been suspended, although Horton’s name remains in the current WHOIS records for those domains.

For his part, Horton said he plans to do what it takes to get the fraudulent domains suspended and scrubbed, and to find out who is responsible —  even if it means filing a lawsuit against a registrar.