A business telephone equipment company in Texas is trying to force its bank to settle a liability claim over an attack by organized cyber thieves last year that cost the company $50,000.

Attorneys for Dallas-based Hi-Line Supply Inc. recently convinced a state court to require depositions from officials at Community Bank, Inc. of Rockwall, Texas. Hi-Line requested the sworn statements to learn more about what the bank knew in the time surrounding Aug. 20, 2009, when crooks broke into the company’s online bank accounts and transferred roughly $50,000 to four individuals across the country who had no prior business with Hi-Line.

While the contents of that deposition remain closed under a confidentiality order, Hi-Line’s lawyers say the information gleaned in the interviews shows serious security missteps by Community Bank, and that they are ready to sue if the bank does not offer a settlement.

“In the event Community Bank refuses to resolve this matter, now that we have uncovered some of the information obtained by virtue of the court’s order, Hi-Line intends to assert claims for misrepresentation, violations of the Texas Deceptive Trade Practices Act, fraud, and breach of warranties, among other things,” said Michael Lyons, a partner with the Dallas law firm Deans Lyons.

Hi-Line president Gary Evans said the fraud began on Thursday, Aug. 20, about the same time the company processes its normal $25,000 payroll. After Hi-Line submitted that batch of payments to its bank, the unknown intruders attempted two more transfers of nearly identical amounts on Friday and the following Monday, Aug. 24.

Evans said he had trouble logging in to his account on Thursday and had the bank reset his password, but the fraudulent transactions hadn’t showed up on his account at that time. He said he took that Friday off as he always does, and when he tried again to log in after returning to work on Monday, he again found the bank’s site would not accept his password.

“When I finally got the bank to reset my password and got into my account, I noticed the duplicate payroll batches and said ‘Why are you all pulling my payroll out three times?’” Evans said of his recollection of how he came to realize his firm had been robbed. “At the time, as I was resetting my password, I had to scroll through the bank’s online customer agreement, which basically said the bank is not responsible for any fraud. I should have known at that point that they were not going to take any responsibility for this at all.”

Evans said the bank should have detected that something was amiss, and not just because of the unusual and repeated payroll batches. He said the crooks accessed his account from five different Internet addresses with locations that were nowhere near Texas, including from computers located more than 1,300 miles away, in Washington, D.C. and Maryland.

Community Bank did not respond to requests for comment. But in protesting the deposition, Community Bank claims (PDF) that hackers had infiltrated Evans’ computer with a virus and used it to steal his online banking credentials, which included a user name, password, PIN and several challenge/response questions.

The organized criminal gang that hacked and robbed Hi-Line could not have succeeded without the assistance of “money mules,” accomplices who were willingly or unwittingly hired through work-at-home job schemes to help cyber thieves launder stolen funds. Among those lured into the scam was Josh Enlow, a 28-year-old gas station attendant in Phoenix. Enlow said he was hired by an entity calling itself The Total Group Co., which initially contacted him in an e-mail stating it had found his resume on a job search Web site, and would he be interested in an “accounts payable” position?

A few weeks later, Enlow received “several” (he says doesn’t recall how many) deposits — including one transfer for more than $8,400. He then wired the money to individuals in Eastern Europe as instructed, he said. (See screen shots below taken from the Total Group Web site.) 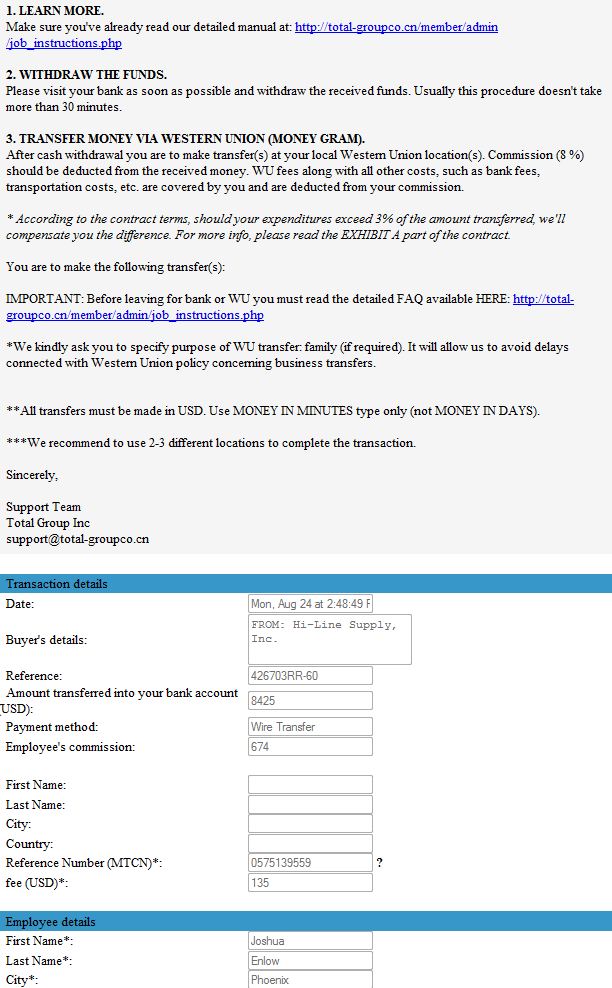 The receipt Enlow received for one of the transfers from Hi-Line's hacked account.