Carders.cc, a German online forum dedicated to helping criminals trade and sell financial data stolen through hacking, has itself been hacked. The once-guarded contents of its servers are now being traded on public file-sharing networks, leading to the exposure of potentially identifying information on the forum’s users as well as countless passwords and credit card accounts swiped from unsuspecting victims.

The breach involves at least three separate files being traded on Rapidshare.com: The largest is a database file containing what appear to be all of the communications among nearly 5,000 Carders.cc forum members, including the contents of private, one-to-one messages that subscribers to these forums typically use to negotiate the sale of stolen goods. Another file includes the user names, e-mail addresses and in many cases the passwords of Carder.cc forum users. 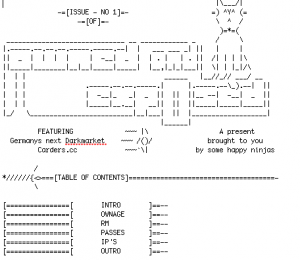 A third file — which includes what appear to be Internet addresses assigned to the various Carders.cc users when those users first signed up as members — also features a breezy explanation of how the forum was compromised. The top portion of this file — which is accompanied by an ASCII art picture of a cat — includes an oblique reference to the party apparently responsible for the Carders.cc site compromise, noting that the file is the inaugural issue of Owned and Exposed, no doubt the first of many such “e-zines” to come from this group.

Ironically, the anonymous authors of the e-zine said they were able to compromise the criminal forum because its operators had been sloppy with security. Specifically, they claimed, the curators of Carders.cc had set insecure filesystem permissions on the Web server, which essentially turned what might have been a minor site break-in into a total database compromise. From the e-zine’s opening salvo:

Many of you guys may have noticed  this breeding German  “underground” shit called carders.cc.  For those who don’t: Carders is a marketplace full of everything  that is illegal and bad.  Carding,  fraud,  drugs, weapons and tons of kiddies.  They used to be only a small forum,  but after we erased  1337-crew  they got  more  power.  The rats  left the sinking  ship.  The voices  told us to own them  since carders is  our fault and we had to fix our flaw. So we did.

During  the  ownage  they  also  gave  us  lulz  by  showing off their ridiculous  configuration skills which had a specific  impact on their security.  They actually managed to chmod and chown nearly  everything to 777 and www-user readable. Including their /root directory.

On the surface, it’s tempting to grin at the misfortune of these fraudsters. Still, the leaked database contains no small amount of password and banking information for many innocent victims. In addition, these types of vigilante attacks typically come with hidden costs: For one thing, while it may be true that law enforcement officials could use some of this information to locate people engaged in computer trespass, and buying or selling stolen personal and financial data, the public release of this information could just as easily prompt those individuals to abandon those accounts and Internet addresses, and even potentially jeopardize ongoing investigations.