Adobe is urging users of its PDF Reader and Acrobat software to install an update that fixes a couple of critical security holes in the products. The patches come amid news that booby-trapped PDF files were responsible for roughly 80 percent of the exploits detected in the 4th quarter of 2009.

The latest update brings Adobe Reader to version 9.3.1, and fixes a pair of vulnerabilities that Adobe has labeled “critical,” which means the flaws could be used to install malicious software on vulnerable systems. Updates are available for Windows, Mac and Linux versions.

If you use Adobe Reader, please apply this update. Then, take a moment to turn off Javascript, the feature in Reader that is most exploited by attackers. To do this, follow these instructions:

Better yet, consider using an alternative PDF reader, such as the free Foxit Reader. I also disable Javascript in Foxit, mainly because I find I don’t need it.

Earlier this week, Web security firm ScanSafe released a report (.pdf !) showing that roughly 80 percent of the Web-based exploits it detected in the last three months of 2009 attacked Adobe Reader vulnerabilities. Add Adobe Flash vulnerabilities into the mix, and the two programs made up the lion’s share of the Web exploits ScanSafe detected in Q409. 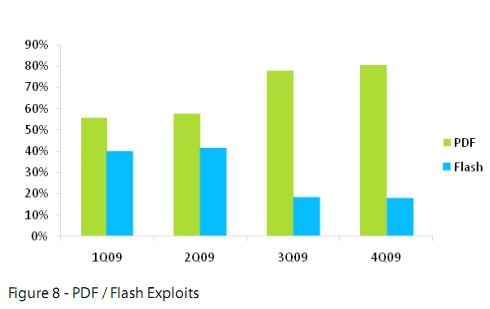 For its part, Firefox maker Mozilla at the end of last year began tracking a huge uptick in the number of Firefox crashes due to Adobe Reader. As some posters to this Mozilla Bug Database entry posit, the crashes were almost certainly due to increased exploitation of the Adobe Reader zero-day vulnerability that Adobe finally patched on Jan. 12, weeks after evidence surfaced that criminal hackers were exploiting the flaw in targeted attacks.

Update, 4:06 p.m. ET: If you decide to do without Adobe Reader and uninstall it, you might want to nix the Adobe Download Manager as well. Researcher Aviv Raff points to some nifty work he’s done which shows that Adobe’s Download Manager — which ships with all new versions of Flash and Reader — can be forced to reinstall an application that’s been removed, such as Reader. According to Raff, a Web site could hijack the Adobe Download manager to download and install any of the following:

Raff writes: “So, even if you use an alternative PDF reader, an attacker can force you to download and install Adobe Reader, and then exploit the (yet to be patched, but now known) vulnerability. The attacker can also exploit 0-day vulnerabilities in any of the other products mentioned above.” Read more on his findings at this link here.